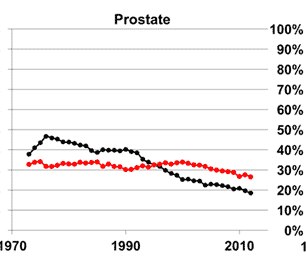 Today is a summary article of my current thinking on the management of prostate cancer. This article was inspired by the release of two large scale studies published in the last week.

For reference, if you’re in the medical field, they are included as links.

To me, both papers are powerful in reviewing toxicity risks from prostate cancer treatment. Really, the current focus of proton therapy in the US oncology market is best defined as a way to deliver the same outcomes with less toxicity. I think in the long run, that will translate to better cure rates, but currently, the most common approach is using proton therapy to limit toxicity. So in simple terms, these papers are 100% consistent with our mission at Oklahoma Proton Center: reducing cancer-related toxicity.

From a medical standpoint, my argument is simply that we do pretty well. I’ve discussed this data and the potential for bias in the proton data in another post, but from a simple perspective, we do a good job of curing cancer. Many will argue that outcomes are equivalent between protons and photons. I think we’ll know that answer more clearly in about 10 years when the large, randomized, controlled trials which are underway today are mature at beyond 7 years of follow-up. Regardless, the proton control data is strong, and all centers are effectively high volume prostate cancer centers.

When compared to radiation, surgery causes more damage to sexual function and urinary control (pad use or diaper use). In both these areas, surgery loses – and loses by >10% margin at every time point beyond treatment.

On the other hand, radiation has a greater chance of causing bloody stool or hemorrhoid type bleeding with bowel movements (about a 6%-8% difference – mainly at 3-4 year mark post-treatment) and of causing nocturia or waking up at night 2 or more times (mainly for 6 months to a year). Radiation (blue) is above the green dotted line (no treatment line). At 2 years and beyond, there is no difference in nocturia.

To me, this isn’t close: surgery causes more change in the quality of life for men treated for prostate cancer. If I had to pick 2 of 4 areas to “lose” to surgery, I’d pick hemorrhoid bleeding and nocturia over impotence and wearing a diaper – every time. And overall survival and metastatic disease survival are both identical at 12 years. (blue – radiation and red-surgery lines overlap so they kind of look like one line).

So I think it’s clear that we have a proven track record of limiting toxicity using external radiation and that we have a very effective treatment. But we’re always looking for better options. Traditionally, proton therapy used a daily rectal balloon, and many facilities still do today. In late 2016, our center transitioned to SpaceOAR as a way to primarily address the rectal bleeding side effects. We knew there were some men who had trouble with bleeding long-term and honestly, there had to be a better way than inserting a daily balloon into the rectum.

SpaceOAR at the Oklahoma Proton Center:

SpaceOAR pushes the rectum away from the prostate so that radiation has less of an effect on the healthy cells of the rectum. With SpaceOAR, our treatment methods likely have even fewer side effects than the above comparison to surgery shows (and there is new data showing surgery toxicity hasn’t changed in a good decade, but I’m trying to be brief).

ADT (Anti-Testosterone Treatment) Use in the Management of Prostate Cancer:

First thing’s first: some men (high-risk) will have better survival rates when using ADT treatment. It is an important tool in the fight against prostate cancer. That said, it is important to discuss risks and benefits and – I believe – use it as little as possible.

Anti-testosterone treatment increases cardiac mortality. It also appears to increase the risk of dementia (data shown below on the right from JAMA 2017).

So, at the Oklahoma Proton Center, we really try to limit the use of ADT treatment for men. We have really good primary treatment (proton therapy), and we lean on it more to control the cancer and we rely much less on ADT treatment (which has terrible sexual side effects, adds to cardiac disease and deaths, and likely adds to a risk of dementia). If we do use it, we try to limit the overall duration. (OPINION: At times, hormones are used or recommended to mask treatment results – either due to poor patient selection, low radiation doses, or low volume. It makes the PSA go down, but it causes undue harm in some patient populations.)

That’s my overview of our current prostate program and how and why we approach this disease as we do. I thought it was good timing to touch upon the classic question of surgery vs. radiation and the effect that ADT treatment can have on cardiac risk and how we address those issues directly to try to minimize toxicity and improve long-term outcomes for men diagnosed with prostate cancer.